The Pilgrims of the Sun By Carlos Najera

Posted on August 4, 2012 by jedwardnajera

I liked looking out the window. Train clacked, rattled, hissed and squeaked its noisy way, west. Everything I saw was new. I watched the desert lands go by. It looked uninviting, scattered mesquite sprang out among the rocks and sand. We rode through the land of huge boulders, through miles of nopales, saguaro, ocotillo, and cholla. It seemed like this trip would last forever.

My father sat like a statue. My mother sat next to him, I could see that she was trying to hold back her tears. He looked forward and would not look outside. I did not see him sleep. He looked like he was thinking, but I had no idea what his thoughts were. 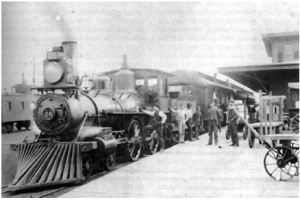 We got off the train in a town called Yuma. The train ride was hot, I could not get used to the hot air blasting through a window. The rocking motion of the train made my stomach feel funny. The smoke and dust made my eyes water. There was drinking water in the back of the train car we were in, but my mama did not like me going back there alone and no one else wanted to go with me.

I was thirsty even when my stomach was full of water. I drank so much I could hear the water splashing in my stomach, and still I was thirsty. My mouth is getting dry just thinking about how thirsty I was back then.

When we stepped off our train and onto the platform, it felt like stepping into an oven. I was afraid to breathe. I thought I was going to burn my lungs. I could see all of us felt that way.

“¡Hay Dios!” My mama said out loud. She fanned herself with the palm of her hand. My father did not say a word of complaint. He wore his suit with the collar buttoned and is tie in place. He stood as stiff as a clothes horse. He pointed to the benches outside the depot. He did not have to tell us to sit, we all knew what to do.

The train clacked, rattled, hissed and squeaked its noisy way west without us now. It would continue its way to Los Angeles but our journey is far from over. My father was gone a long time, even after I wore myself out running around and looking at everything around train depot.

Eventually I saw my father leading a team of horses and our wagon. All our things were loaded. Roberto picked me up and tossed me in the back, and then he helped my sisters get up. We all found a place to squeeze into and with a few clicks we followed the road out of town. It was dusty and clouds of dust kicked up with each step of the horse in each turn of the wheel.

My father still wore his best suit and his tie even though it was now the hottest part of the day. He led us a short distance out of town and soon I could see the river. It was the Colorado River and I could see the water move fast, and I knew it must be deep. Down at the banks of the river I could see other wagons. They were lined up, waiting their turn to cross the river on the ferry.

As we got closer, I saw some kids splashing around near the bank of the river and I jumped off the wagon to join them. Mama screamed and a little bit later Roberto, caught up to me and tackled me to the ground.

“Don’t be a sonso!” He yelled at me. “You don’t know how to swim!”   He was right of course, but it looked like fun and I really wanted to get wet.

It is strange how quickly things change. By the time Roberto and I climbed the bank back to our wagon my mama and my sister’s had started a fire and started cooking. Roberto did not have to be told what to do, take care of the horses, water, feed, and groom. I watched him wipe the horses sides with his forearms and rubbed their legs with his bare hands. He then checked their hooves and all the gear.

I could see my father talking to the man at the ferry. Because of his job, he could speak English quite well and he was not afraid to talk to strangers. I could see my father shaking hands in a friendly way with the man down there and walk his way back to us. There was a long line of wagons and men on horseback waiting to get across.

“We will have to wait two days for our turn to cross.” My father told my mom.

“Maybe I will get my chance to jump in the river.” I was secretly thinking.

I never did get to jump into the Colorado River.  Mothers have a way of keeping kids from having fun. The people waiting the cross were mostly working men.  There were mule teams packing supplies.  There were lot of wagons crossing the river equipment. There were many men on horseback. They were friendly to us. Some of the Americans could speak Spanish and we got along in a friendly way. Most of our time waiting we kept to ourselves and stayed close to our wagon.

It was finally our time to cross. My father and Roberto guided the horses and the wagon onto the platform. There was room for some horses and they made up the way on board with us.

My father was a man of few words. He turned around and looked at me and I knew was not supposed to move. The ferry man made sure the fences were secure and our wagon had the brakes on. Roberto was with the horses talking to them to keep them calm. He waved the flag and then we felt the tug of the rope and we started moving across. I could see why my father gave me that look. I was scared. I could see my mom sitting in front of me with her eyes closed. My sisters were huddled down in the bottom of the wagon. Natalia was my oldest sister but she just curled herself in a ball and cried. They were afraid to look. I was afraid also, but I looked. It was a wide river and the water was moving fast.

I was happy to reach the other side. We got on solid land and moved up the bank of the river. I could feel the skin underneath my hair getting sunburned. And I could see miles and miles of desert land. Not one inch of it looked inviting. I could feel rays of the sun penetrating my clothes and burning my skin. I could feel the heat on my fingernails.

We travelled as a group with the other wagons. There was safety in numbers. Water was the real danger. My father got a job in Mexicali, Baja California. It was still sixty miles away. There was no road. We just followed the ruts of wagons that had gone before us. It took a week of travel but finally we arrived at our destination. This was where we were to begin our new life.  It would be at another border town, this time the border was between California and Baja California.

Even now, I am an old man and I lived in many places in my time, this patch of desert is the only place that feels like home.

I am an artist and a Poet. I live the life of a poet. I published several novels. Nena the Fairy and the Iron Rose, Dust of the Moon are among them, available through Amazon Books. I have spent over thirty five years in a classroom. I am now retired from that profession. My father kept a living record of his lifetime as he lived through the Twentieth Century. He was born in 1908 and almost lived long enough to see us enter the new millennium. He entrusted to me nearly 400 pages that he wrote through the years. Now I am continuing the tradition by posting my own stories and misadventures. I am trying to post a new entry or chapter each Friday. Check in on us at least once a week for the latest post.
View all posts by jedwardnajera →
This entry was posted in Family History and tagged Najera-Madrid. Bookmark the permalink.

2 Responses to The Pilgrims of the Sun By Carlos Najera