Posted on September 16, 2013 by jedwardnajera

“You have to.” My mama told me. “Look at you.  You are all dressed up.  We worked all summer so you can have your new clothes.  We even took you to your uncle Cuco to get a haircut.  And we did all this so that you can look your handsome best when you go to school.”

I could not deny the new shiny shoes that I was wearing, nor my new knee pants, and my brand-new shirt.

I did not want to go.  School was not a happy place.  But I just turned eight, so I went. 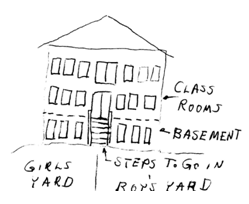 I made a picture of the school.  It is not a good picture but it will give you an idea of what it was like. The play grounds were divided by a high fence. The girls’ side was on the left and the boys’ side was on the right. I followed my sisters to the left side and I was immediately scolded because the boys were not allowed on that side.

The school building had three floors, a basement and two upper floors. Each of the upper floors had four class rooms.

After some difficulty I found my way to my class room. The teacher was young and very pretty. I was assigned to the fourth seat next to the window. I knew some English by this time, I knew the meaning of yes, no, how are you?, fine, and shut up!

The Teacher was talking and writing with chalk on the black board.   I did not understand a word that she was saying so I lost interest and my attention was diverted to the outside of the window.

A flock of seagulls were circling the playground.  Some of them sounded like they were arguing or angry.  I was watching them flying and was fascinated by how they were able to stay up without flapping their wings.

I became aware that the Teacher was standing beside me so I tried one of the words I knew.  I said “Yes.”   She scolded me rather severely and shook her finger at me, then she went back to the front of the room.

So, I learned that I was not supposed to look out of the window.  My education continued.  I was learning more by my daily scoldings than by her lessons.  I was learning by the power of negative thinking.

I am an artist and a Poet. I live the life of a poet. I published several novels. Nena the Fairy and the Iron Rose, Dust of the Moon are among them, available through Amazon Books. I have spent over thirty five years in a classroom. I am now retired from that profession. My father kept a living record of his lifetime as he lived through the Twentieth Century. He was born in 1908 and almost lived long enough to see us enter the new millennium. He entrusted to me nearly 400 pages that he wrote through the years. Now I am continuing the tradition by posting my own stories and misadventures. I am trying to post a new entry or chapter each Friday. Check in on us at least once a week for the latest post.
View all posts by jedwardnajera →
This entry was posted in Family History and tagged Bilingual Education, History of Oxnard, School. Bookmark the permalink.