Call it Sleep by Carlos and Joseph Najera

Posted on December 3, 2013 by jedwardnajera 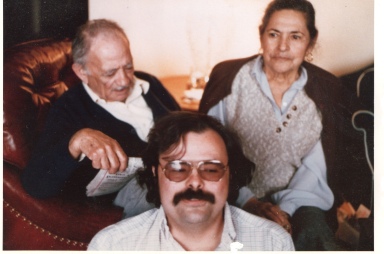 Here’s Christi and I with our youngest son, Joe.  The year was 1981. We were about 70 years old back then living in Cupertino, the Silicon Valley. The picture was taken at a happy moment when all our family was at the house. It was to be our last happy moment.

It was a cancer the doctors said. It started in her kidneys and was spreading like wildfire throughout her body, and there was no way to stop it.

I could see her getting weaker week by week.

That was nearly twenty years ago.

I expected to go first. I certainly did enough things and gone through enough things in my life to deserve that, but I am not in charge. So, I wake up each morning thankful for the new dawn and for the things I had yet to do.

After the grieving, I moved away. I bought a house in Paso Robles, and then I sold it. I finally settled down here in Mexicali, where my life and memories began, the only place that felt like home.

I am an artist and a Poet. I live the life of a poet. I published several novels. Nena the Fairy and the Iron Rose, Dust of the Moon are among them, available through Amazon Books. I have spent over thirty five years in a classroom. I am now retired from that profession. My father kept a living record of his lifetime as he lived through the Twentieth Century. He was born in 1908 and almost lived long enough to see us enter the new millennium. He entrusted to me nearly 400 pages that he wrote through the years. Now I am continuing the tradition by posting my own stories and misadventures. I am trying to post a new entry or chapter each Friday. Check in on us at least once a week for the latest post.
View all posts by jedwardnajera →
This entry was posted in Family History and tagged cancer, Santa Clara Valley. Bookmark the permalink.