By the Book by Carlos and Joseph E Najera

This is a photograph taken in 1913. The man’s name is Andrew Carnegie. He was born in Scotland, and migrated to the United States. Over the years he made his fortune in the steel industry.

He became so wealthy that in his later years of life he became one of the leaders in the philanthropist movement. He gave away about $350,000,000, in that time. That translates to $13.7 billion in our modern times. He gave a gave away almost 90% of his fortune according to the Wikipedia.

One thing of interest to him was building libraries, not only here in the United States but in other parts of the world. In the US alone 1,689 libraries were built by his generosity. He built over 600 libraries in the United Kingdom and still more in other countries. 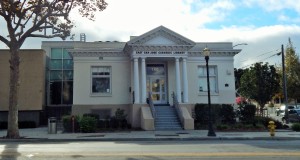 Here is one of his libraries here in San Jose where I live. And below is a picture of another one of Carnegie’s library projects.

This one is in Oxnard. It is on C St. a part of the old downtown area. I grew up on the same street, a few blocks going North. From this point of view, it would be to your left.

I was 12 years old and growing in the beginning of the 1920s.   Back then, many of my school buddies had already quit middle school to take on fulltime work. There was plenty of work at the sugar refinery, the farms and orchards and packing houses. The town was growing with new opportunities opening up almost every day. Despite that, times are were hard. Everybody needed to work. My brother Bobby quit school and started working for the lumber company.

My mama must have thought I was special. She always insisted that I stay in school, study hard, and make something of myself by using my brains instead of my muscles. My father was a civil engineer and worked on a lot of projects in his lifetime.

I could see what my mother meant. My stepfather John, Bobby, and just about everybody else that we knew worked long and hard hours. They would come home, bone tired, weary and exhausted at the end of each day. For most of the workers it was from sun up to sun down, no sick days, no benefits. If the job was too tough for you there were always twenty or more workers eager to take your place, and they would even do it for less pay. It was work until you could work no more.

We all worked. I had a paper route. I swept floors at the Chinatown market. The owner and I became friends. At first neither of us could speak English, but we got along anyways.   Sometimes I got paid with a few coins, sometimes with a handful of broken cookies. I hung around the train station, and cleaned up there after I sold my papers. But no matter what I did for a job I came home and studied until I fell asleep.  The future was dark for most of us: eat, sleep, work, die. There were very few of us who would escape that future. My mama wanted me to be one of them. That came with hard work also, but through books.

That old library hasn’t changed much since I was a boy, except now it’s a museum. At one time it was used as a police station for an old TV show starring Burt Reynolds.

I have spent a lot of time there, reading, thanks to my mama’s encouragement. I checked out piles of books and read them at home. In fact by the time I finished high school in 1927, I read just about every book that was in there.

I am an artist and a Poet. I live the life of a poet. I published several novels. Nena the Fairy and the Iron Rose, Dust of the Moon are among them, available through Amazon Books. I have spent over thirty five years in a classroom. I am now retired from that profession. My father kept a living record of his lifetime as he lived through the Twentieth Century. He was born in 1908 and almost lived long enough to see us enter the new millennium. He entrusted to me nearly 400 pages that he wrote through the years. Now I am continuing the tradition by posting my own stories and misadventures. I am trying to post a new entry or chapter each Friday. Check in on us at least once a week for the latest post.
View all posts by jedwardnajera →
This entry was posted in Education, Family History and tagged Oxnard. Bookmark the permalink.