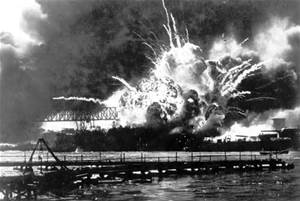 The attack on Pearl Harbor led to our country entering World War II. Many of our citizens enlisted the very next day. Many more were called to duty by the draft boards. So many of our young men became members of the war effort, that one consequence was the shortage of workers. Many of our young women at the time stepped up to serve in the Women Army Corp, (WAC), and the WAVE program for the Navy. 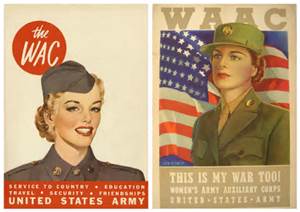 Many more women stepped up to fill the vacancies that were once considered “man’s” work.  One result of all this was a tremendous shortage of farmworkers. 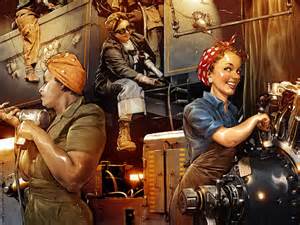 This led to the development of the Bracero Program. It was an agreement between the United States and Mexico to bring in workers to work on the farms. It was intended to terminate upon the end of World War II. Another feature of the program was that the workers return back to Mexico after the crops were gathered.

This may have seemed like a perfect solution to the labor problems for the farmers. However, so many Mexican people seeking work gathered at the border towns. The Bracero Program could not handle the massive amounts of Mexicans seeking employment. Many of those crossed the border anyways in search of employment opportunities. 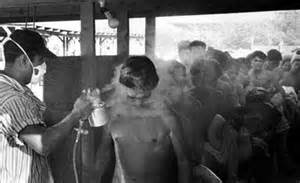 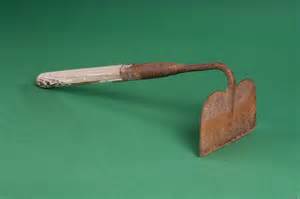 Speaking of outrage, we are looking at a hoe that was commonly used by the farmworkers at the time. The handles were twenty-four inches long, and here you see a photo of the men using them.   Imagine working that way from sun up to sun down. I don’t know why the farmers wanted these workers to use them, I’m trying to be positive. This must’ve taken a terrible toll on their backs. 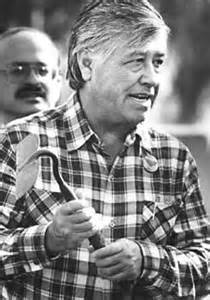 This is one of the issues that Cesar Chavez and the United Farm Workers had against the farmers. 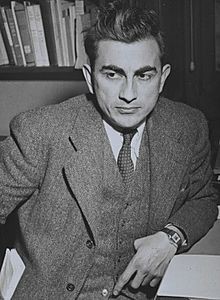 This leads us to this picture I took in downtown San Jose, in a walkway between the Fairmont Hotel compound. We are looking at a table. 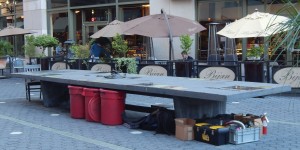 However, if you look closer you will find that it is not really a table. It is a monument, constructed to honor Dr. Ernesto Galarza (1905 to 1984). He was a writer, speaker, professor, and a resident of San Jose. Among his books are: Barrio Boy, published in 1971, Merchants of Labor: The Mexican Bracero Story, published in 1964, Spiders in the House and Workers in the Field, published in 1970. He was nominated for the Nobel Prize in literature in 1976. 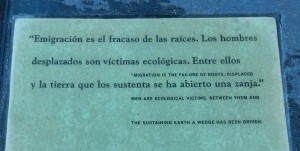 This is a photo of one of the plaques that are on the table. He wrote about the farmworkers that were brought into the United States through the Bracero program. His book Merchants of Labor was an exposé of the abuses within the Bracero Program. This is important today because every now and then some politicians want to bring back this program. Keep an ear open for this when you watch the news, it will come up. 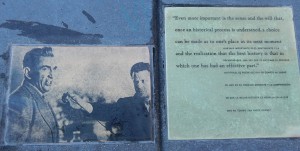 Dr. Galarza began his life 1905 in Mexico. His family moved to Sacramento California. He went through the school system there then received a scholarship to Occidental College in Los Angeles, and continued his studies at Stanford University. He earned a masters degree there in 1929. 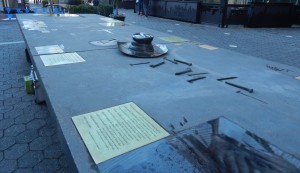 (Another view of the table.)

In 1947 he was awarded a PhD from Columbia University. About this time became a labor organizer concentrating his efforts on farmworkers. He organized a strike against the DiGiorgio Corporation in Arvin, California. For the next ten years he continued organizing strikes. 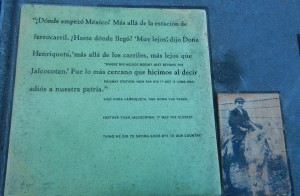 His writings and involvement in the struggle helped bring an end to the Bracero Program and opened the door for Cesar Chavez and the United Farm Workers, (UFW), to begin organizing the migrant farmworkers. 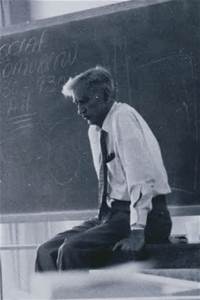 This is the way I remember him, back in the early 1970’s. He was teaching a class at San Jose State. His age, physique, and mannerisms were similar to my father’s. I felt a kinship to him right away, and I was proud to be among his students. He was not an emotional man. He listened thoughtfully to our questions and was thoughtful in his responses. He was a scholar and he argued with facts not emotions.

He left a long list of books that he had published. Some of them were read worldwide. He led me to believe that someday I can be a writer as well. I am about his age now as he is pictured here, I am a late bloomer, still working on that goal.

Below is a partial list of his publications, these are available Through Amazon Books:

I am an artist and a Poet. I live the life of a poet. I published several novels. Nena the Fairy and the Iron Rose, Dust of the Moon are among them, available through Amazon Books. I have spent over thirty five years in a classroom. I am now retired from that profession. My father kept a living record of his lifetime as he lived through the Twentieth Century. He was born in 1908 and almost lived long enough to see us enter the new millennium. He entrusted to me nearly 400 pages that he wrote through the years. Now I am continuing the tradition by posting my own stories and misadventures. I am trying to post a new entry or chapter each Friday. Check in on us at least once a week for the latest post.
View all posts by jedwardnajera →
This entry was posted in Education and tagged Bilingual Education. Bookmark the permalink.