The Tower of Light by Joseph E Najera

Posted on November 28, 2015 by jedwardnajera

In its time the San Jose Electric Tower was a wonder that captured the world’s attention.

Before it was known as Silicon Valley, the Santa Clara Valley was known as the Valley of Delights. It is located at the south end of the San Francisco Bay.

The valley floor provided a rich soil for orchard trees to flourish. Artesian wells provided  an  and limited supply   of water, and the mountains on both sides of the valley sheltered her from the weather. Dried fruits and wines from the flourishing orchards and vineyards were sent across the nation and all over the world.

Seven years before the Eiffel Tower was constructed, some enterprising men in San Jose raised funds and built the San Jose Electric Tower.

It was a noble attempt to bring light to the city. Four of these towers were planned, but only one was built.

The Tower was constructed at the intersection of Santa Clara and Market streets in downtown San Jose. This photo above was taken in the early 1900’s. You can see the light tower in the background.

That building with the pointed tower is still there. It was the U.S. Post Office, then later it became the San Jose Public Library. It is now a part of the San Jose Museum of Art. 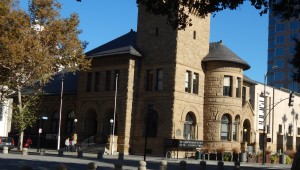 That tall building standing next to the old library is Saint Josephs. She is still there also. It got run down over the years and has since been restored. My family often went there for Mass when we were still growing up.

In the foreground of that old photo above is what is now known as Cesar Chavez Plaza. The trees have grown since then, as you can see below. Across the street  from the plaza is the location of the monument that I wrote about in an article called, “the Domino Effect”.

The plaza is famous for the sculpture of Quetzcoatl, the feathered serpent. You can see it below. Why is it famous? I am not the only one that thinks this looks like a pile of dog poop.

I turned to my left at the sculpture and look down to the end of the block and I see Original Joe’s. I wrote about this restaurant in another article titled, “Bitter Sweets”.

Enough of the tour of the city, back to the Tower. It reached the height of 237 feet. It took fifteen tons of steel to put it together. It was so big that street cars, bicycles and buggies were able to ride through it.

The best technology in 1881, when it was built, was to use carbon arc lights. They can be very bright, lighthouses and locomotives used them. There were four of these carbon arc lights at the top of the tower showering light in each direction.

The light could be seen throughout the valley, and the tower was a promotional success, though not welcomed by everyone. There were many complaints about the light interrupting the sleep cycle of the chickens. Ducks often crashed into it and fell to their death.

The tower lasted for thirty four years until a wind storm in 1915 blew it down. Electric lights were practical to use by then so there was never talk about rebuilding the tower.

A smaller version of the tower was constructed in the San Jose History Park a short distance away. It is a remembrance, of a part of the history and development of San Jose.

I am an artist and a Poet. I live the life of a poet. I published several novels. Nena the Fairy and the Iron Rose, Dust of the Moon are among them, available through Amazon Books. I have spent over thirty five years in a classroom. I am now retired from that profession. My father kept a living record of his lifetime as he lived through the Twentieth Century. He was born in 1908 and almost lived long enough to see us enter the new millennium. He entrusted to me nearly 400 pages that he wrote through the years. Now I am continuing the tradition by posting my own stories and misadventures. I am trying to post a new entry or chapter each Friday. Check in on us at least once a week for the latest post.
View all posts by jedwardnajera →
This entry was posted in Family History, San Jose. Bookmark the permalink.