Homage to The River Boat Queen by Carlos and Joseph Najera

Posted on September 19, 2016 by jedwardnajera 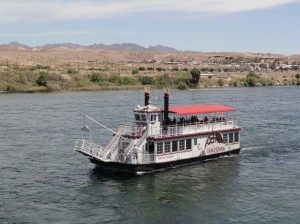 In our modern times The Fiesta Queen had sailed out of Laughlin, Nevada. She provided tours along the Colorado River and she offered dinner cruises as well. She was a common sight on the river for several years up and down the river.

Since then she has moved her anchorage to the South Saskatchewan River under a new handle. She is now called the Prairie Lily and tours the river there during the summer months.

This river boat and others like her did it for fun, but there was a time when  the paddle wheelers were here for work. They were the perfect water craft for transporting men and equipment up and down our rivers.

Fort Yuma was first built on the California side of the Colorado River in 1849.  To supply the new fort, wagon and pack trains had to begin their journey at San Diego travel east.  They had to cross travel on the rugged mountain trails.  There were no roads East at that time.  Miles of rock, sand and boulders added to the difficulty of crossing over. Once in the Imperial Valley the supply trains had to cross nearly 80 miles of loose sand, then dunes and soft powdery dirt. There were springs, oasis and rivers along the way but they were still a challenge to get from one to another.  The bottom line was, transporting supplies from the Pacific coast to Fort Yuma at that time was slow and dangerous and at a cost of $500 to $800 per ton.

The idea of using a paddle wheeler to transport supplies was thought of almost immediately. There were many shallow waters and sand bars on the river, and they were constantly changing. The paddle wheelers drew only three feet of water, perfect for navigating the river. Their bottoms were flat. They really only needed just a few inches of water to get over shallows or sand bars. 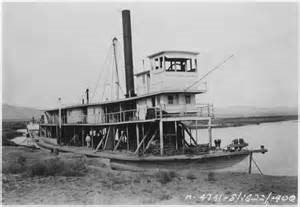 In 1852 a contract awarded to Captain James Turnbull established the beginning of riverboat trade. Turnbull purchased a small steam tug, broke it down and shipped it, along with his first load of supplies, on the schooner Capacity from San Francisco to the mouth of the Colorado.

It took two months to reassemble the tug, but in November, Turnbull’s 65-foot side-wheeler, renamed Uncle Sam, started upriver with 32 tons of freight and generated enough steam to appear devil like and scare off some Yuma Indians.

Supplies were brought in by ship to the port of San Felipe located on the Sea of Cortez, Baja California. From there they were loaded on the paddle wheelers. It was about a hundred miles to Yuma at a fraction of the cost of transporting supplies by land. 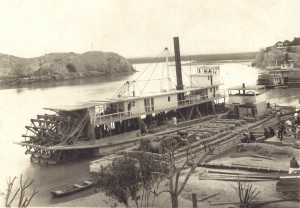 Local Native Americans were hired to deliver wood at designated places along the river for fuel.

This boat was named “Cocopah”, the name of the local people that lived there.

The construction of Laguna Dam in 1908, the year I was born, blocked the Colorado River 14 miles above Fort Yuma.  This meant the end of riverboat traffic.  They were no longer needed.  Progress brought the railroads and the railroads became king.

I am an artist and a Poet. I live the life of a poet. I published several novels. Nena the Fairy and the Iron Rose, Dust of the Moon are among them, available through Amazon Books. I have spent over thirty five years in a classroom. I am now retired from that profession. My father kept a living record of his lifetime as he lived through the Twentieth Century. He was born in 1908 and almost lived long enough to see us enter the new millennium. He entrusted to me nearly 400 pages that he wrote through the years. Now I am continuing the tradition by posting my own stories and misadventures. I am trying to post a new entry or chapter each Friday. Check in on us at least once a week for the latest post.
View all posts by jedwardnajera →
This entry was posted in Colorado River, Uncategorized and tagged History of Imperial Valley, water. Bookmark the permalink.