By Any Other Name by Joseph Najera

Posted on October 3, 2016 by jedwardnajera

Juan Rodríguez Cabrillo’s name can be found up and down the west coast many times over.  He carried a name that is remembered.  What did this man do to make himself remembered?

The Maritime Museum of San Diego has done a wonderful thing to help us remember.

Between the years of 2011 and 2015, they built a “full-sized, fully functional, historically accurate replica of the ship San Salvador.” Here I am quoting Wikipedia, the free encyclopedia.

She is called a galleon measuring 92 feet long with a beam of 24 feet. The capacity is listed as 200 tons. That was twice the capacity of the Santa Maria of Columbus’ First Voyage.

The word “ton” can be a tricky word meaning 2,200 pounds. It can also be mistaken for “Tun” a large wine barrel.

On 28 September, 1542, Cabrillo claimed San Diego Bay for Spain. He moved on and claimed Santa Catalina Island and the nearby San Clemente Island.

Cabrillo next came back to the mainland to claim San Pedro Bay. He moved on to Santa Monica Bay. He explored Anacapa Island, San Miguel Island.

He sailed north as far as the Russian River, north of the Golden Gate. They entered Monterey Bay then decided to spend the winter back at Santa Catalina. Cabrillo died there of a fatal infection on 3 January 1543.

Here’s the San Salvador tied up at Fisherman’s Wharf in Monterey. My wife and I were fortunate enough to board her. I have spent some time on the Santa Maria replica that is now on display in Corpus Christi, Texas. This is a much larger and more seaworthy craft than the ships that Columbus used.

I looked up and saw a crow near the crow’s nest. How often does that happen?

Here she is under construction. It took nearly five years to build and many more years before that in planning and fund raising.

When completed, San Salvador was launched on San Diego Bay and became part of the Museum’s fleet of historic and replica ships.

She made her debut on 4 September 2015, leading a parade of tall ships for the start of San Diego’s annual Festival of Sail. At that time she was powered by an auxiliary engine since she had not yet been fitted with sails. 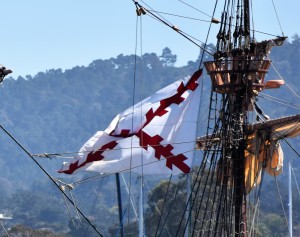 Thanks again to Jerry Soto (http://www.jgsoto.smugmug.com/)  for the use of his photographs.

I am an artist and a Poet. I live the life of a poet. I published several novels. Nena the Fairy and the Iron Rose, Dust of the Moon are among them, available through Amazon Books. I have spent over thirty five years in a classroom. I am now retired from that profession. My father kept a living record of his lifetime as he lived through the Twentieth Century. He was born in 1908 and almost lived long enough to see us enter the new millennium. He entrusted to me nearly 400 pages that he wrote through the years. Now I am continuing the tradition by posting my own stories and misadventures. I am trying to post a new entry or chapter each Friday. Check in on us at least once a week for the latest post.
View all posts by jedwardnajera →
This entry was posted in California History and tagged California. Bookmark the permalink.