Posted on December 15, 2018 by jedwardnajera 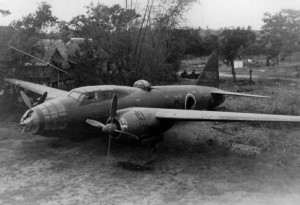 This is one of the kinds of bombers used by the Japanese. They were called by the American GIs, the “Flying Zippo.” Their fuel tanks were poorly protected and exploded easily, especially when hit.

Were a medium range bomber, with the range of close to 3000 miles and it airspeed of around 270 mph. They were manned by a crew of seven. They were able to carry over 1, 700 pounds of bombs. 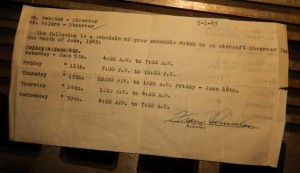 This is a photo of the document I found in my father’s things. It is a schedule as an aircraft observer. The date is 1943. You see at the top of the page it was addressed to a man named Webster as well as my father.

Maurice Webster was a lifelong friend of my father’s I remember him well. When we lived in El Centro and drove up to the city of Oxnard to visit with the family, we would stop at his house in West Covina. That whole area was pretty for me to watch. The whole sky glowed. Businesses and streetlights, headlights and taillights filled my eyes with wonder.

We would drive through the neighborhoods of West Covina until we arrived at the house of Mr. Webster. My father called him “Webb.” It seemed like every house glowed with Christmas lights every window had a Christmas tree sparkling with different colors.

Back in El Centro, we could see the stars from our front porch. Even with the houses lit up with Christmas decorations and Christmas lights there were still a lot of dark. That was the world I was familiar with until we would drive through the LA basin and filled my eyes with wonder.

Admiral Isoroku Yamamoto said this about the attack on Pearl Harbor, “I fear all we have done to awaken a sleeping giant and fill them with a terrible resolve.” Of course, maybe he only said that in the movies but it’s a good quote.

My father tried to enlist but he had skills that were required here at home. Or maybe it was his leg broken into 23 pieces that gave him a limp when he walked, or perhaps it was the encephalitis that put him in a coma for months. It could be that he was well over 30 years old at that time with three children to take care of.

Many of my uncles enlisted, older cousins as well. I was five years in the future so I don’t know everyone’s exact story.

I found this piece of paper among my father’s things. I was surprised to learn that he was an aircraft observer, along with his friend Webb.

They were a part of The Aircraft Warning Service. Japanese bombers had a range of over a thousand miles. That means the threat was real. On both East and West Coast close to a million volunteers took part in the program.

They watched the skies for possible enemy aircraft. The observation posts were manned in two-hour shifts, 24 seven. They had charts that they would use to identify enemy aircraft.

The program came to an end in 1944. It became clear by then that we were under no threat from the skies any longer.

My father never mentioned doing this, being a part of this program. He had lots of stories to tell and he wrote many of them down. You can read most of them at this Word Press location. I also compiled a collection of his stories called Dust of the Moon, available through Amazon books.

Save yourself a few bucks and read his posts here for free.

I am an artist and a Poet. I live the life of a poet. I published several novels. Nena the Fairy and the Iron Rose, Dust of the Moon are among them, available through Amazon Books. I have spent over thirty five years in a classroom. I am now retired from that profession. My father kept a living record of his lifetime as he lived through the Twentieth Century. He was born in 1908 and almost lived long enough to see us enter the new millennium. He entrusted to me nearly 400 pages that he wrote through the years. Now I am continuing the tradition by posting my own stories and misadventures. I am trying to post a new entry or chapter each Friday. Check in on us at least once a week for the latest post.
View all posts by jedwardnajera →
This entry was posted in California History, encephalitis, Movie History, Oxnard, WWII and tagged California, Christmas, WWII. Bookmark the permalink.