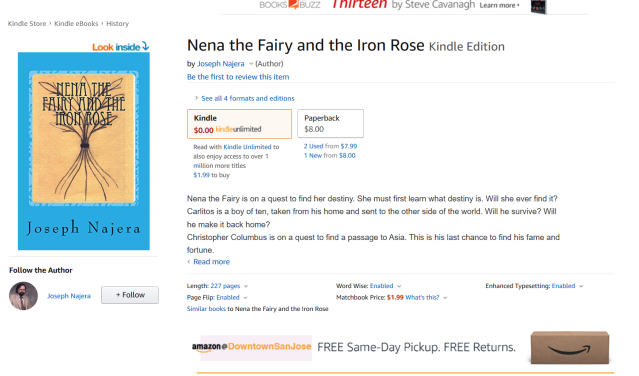 All my father’s life, that is to say, ever if since I was born, my father would joke about a little fairy that followed him around. Through the years he had a porcelain figure of Walt Disney’s Tinkerbell on his drawing table. He didn’t call her that. He had his own name for her, Nena. He was an engineer, a machine designer, and did most of his work on his drawing table.

When he retired he found a place in our house for Tinkerbell. She was on the shelf, sometimes hidden from view but she was always there. When my mom passed away he decided to retire in Mexico. He took a few things with him, but one thing he took was Nena. My father lived alone except for his lifelong companion.

My father left me a few names of his ancestors. His mother’s last name was Madrid Lucero. My great-grandparents and beyond remained a mystery. It was the same on my mother’s side.

I started to speculate about how my last names, (Najera Ledesma) came to be here in the New World. I had nothing to go on. The records at the Church of the Latter Day Saints helped a little bit. Ancestry.com wasn’t around then.

I started writing a story about Nena. Who was she? Where did she come from? The moment I asked the questions I knew the answers. In the island of Tir Nan Og, is a small meadow surrounded by trees. A crystal clear stream runs through it, fed by glacial waters. In that meadow lives the Green Isle Fairies. The wondrous thing about this meadow on this land is that every day is the first day of Creation. Every time the sun breaks over the horizon is the first day. Nena and all the other fairies that lived there wake up there once again one day old.

This is how my story starts. Nena wakes up one morning and is sent on her Destiny Quest. The fairy Queen does not tell her what the quest is. The only thing Nena knows this that she must enter the human world and find it.

The rest of the story connects with my mystery ancestor. They find each other on the final voyage of Christopher Columbus.

I invite you to make a list of ten, maybe, ten people who changed the world. The world was different at the end of his lifespan. How many other people have done that? I understand the controversies concerning him. He was a great man of the sea. He was a great navigator. When he returned to the New World the second, third, and fourth time, he knew exactly where he was.

We can create a long list of terrible consequences of his landing in the New World. And all of those would be true. The story I created is not about Columbus. It was about Nena, a boy, and her destiny.

I have studied the life of Columbus, sailing, the politics of the time. I have spent a lot of time in Corpus Christi, Texas, the home of the replicas that Spain built for the 1992 celebration of his first voyage. I spent a lot of time visiting those ships and using them as the setting for the story.

Here is a link where you can find the story at Amazon Books. It is also available as a Kindle book: https://www.amazon.com/dp/B00MS89IDW

I am an artist and a Poet. I live the life of a poet. I published several novels. Nena the Fairy and the Iron Rose, Dust of the Moon are among them, available through Amazon Books. I have spent over thirty five years in a classroom. I am now retired from that profession. My father kept a living record of his lifetime as he lived through the Twentieth Century. He was born in 1908 and almost lived long enough to see us enter the new millennium. He entrusted to me nearly 400 pages that he wrote through the years. Now I am continuing the tradition by posting my own stories and misadventures. I am trying to post a new entry or chapter each Friday. Check in on us at least once a week for the latest post.
View all posts by jedwardnajera →
This entry was posted in Ancestry, autobiography, Columbus, Fairy Tale, heart breaks and tagged family, The New World. Bookmark the permalink.